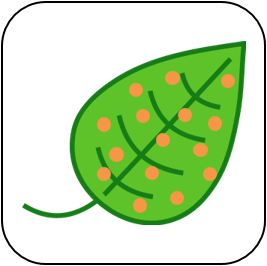 I really love this time of the year as plants emerge once again after their long winter naps.  I also love the fact that I now get to start looking once again for some of my favorite plant diseases.  At the top of the list at this time of the year are the rust diseases.  Rusts encompass a large group of fungal diseases, where the fungi produce brightly-colored (yellow to orange to bown) spores.  Each rust fungus has a very specific host range.  The following are a few of the rusts (one on a broad-leafed tree, one on a conifer and one on an herbaceous plant) that I have recently seen either through the clinic or in my own yard.

Crown rust:  Crown rust is classic rust of grass species such as turfgrass and oats.  If you’ve ever walked through your lawn and gotten orange shoes, you’ve encountered this disease.  The fungus that causes crown rust is Puccinia coronata, which has several variants adapted to infect specific grass hosts.  The disease and pathogen names come from the look of the resting spores of the fungus.  These spores have spikes that give them the appearance of a crown.  At this time of the year, I don’t see crown rust on grass or oats (that comes later in the growing season), but I see it on a second host (called the alternate host) of the fungus, buckthorn.  Buckthorn is actually required by the crown rust fungus to complete its life cycle.  Puccinia coronata causes yellow-orange, powdery patches on the buckthorn leaves and green stems, and I actually use crown rust as an ID feature for buckthorn.  If I see seedlings that I think are buckthorn, but I’m not quite sure, I look for the characteristic orange patches of crown rust to confirm.  And if you need another reason get rid of buckthorn, in addition to this plant being incredibly invasive, here it is.  If you remove buckthorn, you will prevent the crown rust fungus from completing its life cycle and reduce the severity of the disease on turf and oats.

Weir’s cushion rust:  This is rust disease of spruce that I see infrequently, but I just received a sample of it this past week in the clinic.  I was over the moon!  (Yes, I know I’m weird and lead a very sheltered life.)  The fungus that causes this disease is Ceropsora weirii (formerly Chrysomyxa weirii), a single-host rust fungus that only requires spruce to complete its life cycle.  Infection leads to yellow banding on one-year-old needles.  Within these bands in the spring (typically April or May), fruiting bodies (i.e., reproductive structures) of Ceropsora weirii form yielding orangish spores that blow to newly emerging needles where the fungus infects.  The fruiting bodies are easily visible with a hand lens or even with the naked eye.  Eventually the infected3 needles brown and drop off the tree.  Management of Weir’s cushion rust can be a challenge and typically involves use of fungicides to protect newly emerging needles.

Mayapple rust:  I’d like to give a shout-out to Brenda Dahlfors, Master Gardener Program Coordinator with University of Illinois Extension for sending me photos of this cool rust.  The fungus involved here is another species of Puccinia, Puccinia podophylli.  This is another single-host rust, where the fungus that only infects mayapples.  The disease is most visible in the spring when bright orange, powdery patches develop on the undersides of leaves.  On the upper leaf surfaces above these patches, you will see yellow spots/discolored areas.  The orange spores produced by the pathogen reinfect mayapple plants, causing additional disease.  The bright orange patches tend to fade to a duller brown as they age and convert to producing brown overwintering spores.  These overwintering spores germinate in the spring to produce yet another type of spore that causes the initial infections in the spring.  Careful removal of infected leaves and plant debris (burn, bury or hot compost this material) combined with fungicide sprays where appropriate is the typical management strategy for this disease.

These are just a few of the cool rust diseases that you may encounter as you are out and about.  Watch for these and other rusts, and enjoy them when you find them.  There are the most visually colorful and attractive diseases that I see.  For additional information on the PDDC and its activities, check out the PDDC website.  To learn about new PDDC education materials and programs, follow the clinic on Twitter or Facebook (@UWPDDC) or contact the clinic at pddc@wisc.edu and ask to be added to the PDDC’s listserv (UWPDDCLearn).

A new #UWPlantDiseaseFacts: Plant Problems to Watch for in 2023 (by Brian Hudelson) is now available at https://pddc.wisc.edu/fact-sheet-listing-all/. 🍄

In 2023, @UWPDDC will sponsor monthly plant disease talks. See https://pddc.wisc.edu/2023-pddc-plant-disease-talks/ for details and to register. If you have questions about the talks, feel free to contact the clinic at (608) 262-2863 or pddc@wisc.edu.