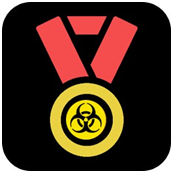 Most days, I really love my job.  I am well-known for my love of plant disesaes and I tend to get giddy when plant samples arrive at the PDDC.  There is always the possibility with each new package that I will become reacquainted with an old disease friend (e.g., cedar-apple rust) or that I will be introduced to new disease friend that I’ve been wanting to meet for years (e.g., zonate leaf spot).

Others days, I open a package and my shoulders sag, and I let out sigh.  This most often occurs when the sample potentially has a disease/pathogen that is regulated by either the state or federal government.  These diseases are often fascinating in and of themselves, but the paperwork involved with their diagnosis can be soul crushing.  Right now in Wisconsin, there are three diseases on my radar that fall into this dreaded category.  This month’s web article is devoted to these medal-winning diseases that keep me up at night.

In the scheme of things, boxwood blight is not bad as regulated diseases go.  Boxwood blight was introduced into Wisconsin in 2018 through contaminated nursery stock and is regulated at the state level.  The Wisconsin Department of Agriculture, Trade and Consumer Protection (WI DATCP) monitors boxwood blight’s spread and is currently attempting to eradicate the disease as it rears its ugly head, particularly in nurseries.  I first encountered boxwood blight last summer when a landscape maintenance professional submitted a sample from a boxwood shrub planted at a Madison area residence.  Once I made my diagnosis, I immediately contacted WI DATCP so that they could follow up with the homeowner regarding containment and eradication.

Boxwood blight typically first shows up as distinct spots appearing on leaves in the lower canopy of boxwood shrubs.  Most boxwood varieties are very susceptible to the disease and rapidly defoliate and die.  Pachysandra, a common ground cover, is also susceptible.  If you want to see how devastating this disease can be, do an internet search on “boxwood blight” and your favorite state along the eastern seaboard (e.g., North Carolina, Virginia, Maryland).  You will find photos of landscapes where every boxwood has been wiped out.  For additional details on this disease, check out our boxwood blight pest alert.

Sudden oak death (I prefer the name Ramorum blight) was first described in California in the 1990’s and has killed millions of oaks in that state.  Because of its destructive potential, the disease/pathogen is regulated at the federal level by the United States Department of Agriculture Animal and Plant Health Inspection Service (USDA APHIS).  There has been movement of the disease/pathogen over the years into other states (again through movement of nursery materials), and in 2019, WI DATCP inspectors found the disease on an azalea in a nursery in Wausau.  Unfortunately, azaleas from the same supplier were distributed to nurseries around Wisconsin, and many were sold to homeowners before WI DATCP became aware of potential problems.  Another possible introduction of the disease/pathogen on red ‘Double Knockout’ roses also occurred in 2019.  I have not yet had this disease arrive in my lab, but I did prescreen several samples for the disease last summer.  Based on my preliminary testing, I forwarded two suspicious samples to a second lab for another round of testing.  If those samples had tested positive at this second lab (luckily they didn’t), they would have been sent to yet another lab (a USDA APHIS facility) for a final round of testing.

Unfortunately the symptoms of sudden oak death/Ramorum blight are not readily distinguishable from other diseases.  Branch dieback, nondescript leaf browning and eventually plant death can be typical symptoms.  See our sudden oak death pest alert for additional details on this diease.

This is the granddaddy of regulated diseases that I have encountered over the years.  One variant of the bacterium that causes this disease (Ralstonia solanacearum race 3, biovar 2) causes a devastating disease of potatoes (called brown rot) and was classified in the early 2000’s as a select agent by the federal government.  This means that the pathogen is recognized as having the potential to be weaponized and used in bioterrorism attacks against US agriculture.  Ralstonia wilt was first detected on geraniums in Wisconsin (on a plant submitted to the PDDC) in 1999 with additional introductions on this crop through 2004.  In March of 2020, the disease/pathogen was detected after a 16 year absence, this time on Fantasia® ‘Pink Flare’ geraniums in Michigan.  This variety of geranium was also distributed to greenhouses in 38 other states including Wisconsin.  USDA APHIS is currently leading efforts to eradicate potentially contaminated plants and to decontaminate affected greenhouses.  The PDDC has the capacity to detect the bacterial species involved in the disease (but not the specific race and biovar) using the plant disease equivalent of a home pregnancy test.  Suspect samples must be forwarded to USDA APHIS labs for a final confirmation of race/biovar.

A major problem with Ralstonia wilt is that plants can be contaminated with the bacterium without showing symptoms.  Eventually, in susceptible hosts like geranium, the bacterium colonizes the plant’s water-conducting tissue and blocks water movement, leading to leaf wilting and yellowing.  Sometimes, only part of the plant will wilt at first, but eventually the disease is lethal.  For more on this disease, check out our Ralstonia wilt pest alert.

If you believe you are seeing ANY of the diseases described in this article, please contact me IMMEDIATELY at (608) 262-2863 or pddc@wisc.edu.  We will need to make arrangements for appropriate testing.  And also, as always, feel free to follow me on Twitter or Facebook (@UWPDDC) to receive updates on these and other diseases.