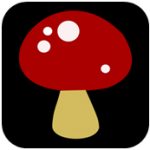 Over the past two weeks, I have received a number of photos of incredibly cool microorganisms that have popped up in people’s gardens or around their homes.  These organisms have all turned out to be non-pathogens (i.e., they don’t cause plant diseases), but they are some of the more extraordinary organisms that I encounter in my job.

Bird’s Nest Fungi:  If you’ve recently spread new mulch, you may eventually notice small (maybe ¼ to ½ inch in diameter) cup-like structures forming in groups on the mulch surface.  Closer examination of the cups will reveal egg-shaped structures inside.  Looking at these tiny structures as a whole, you’d swear that some sort of miniature bird has built a series of nests in your flowerbed.  But these mini-“nests” are actually reproductive structures of one of the bird’s nest fungi.  The “eggs” are packets of fungal spores attached to the interior of the cup by a cord-like structure.  When a raindrop hits the nest, the momentum of the falling water catapults an “egg” into the air.  The attached “cord” stretches and eventually breaks.  The broken end is sticky and eventually adheres to some object (e.g., a branch or leaf) as the “egg” flies through the air.  The attached “egg” swings around on the cord (think of a bola) and eventually gloms onto something as well.  As the walls of the catapulted “egg” degrades, the spores inside are released.  Being elevated, the spores are more likely to be picked up in air currents.  What an amazing adaptation that increases the likelihood that the spores are spread over a large distance!

Stinkhorns:  Sometimes when people dig in their gardens they encounter large (an inch or larger in diameter), soft, egg-like structures in the soil.  Folks often think these are actual bird or reptile eggs.  However, if you cut the “eggs” through the center along the long axis, you discover inside a mushroom-like structure with a stalk and an oftentimes honeycomb-like cap.  These mushrooms enlarge (eventually causing the “eggs” to “hatch”) and poke up above the soil surface.  These emerging mushrooms often resemble a certain, uh-hem, part of the male anatomy.  I have had a number of amusing conversations over the years as clients have attempted to describe stinkhorns without naming the offending body part.  The name stinkhorn comes from the fact that as they produce spores, these fungi tend to smell pretty rank.  The foul small (akin to rotten meat) attracts certain insects (e.g., flies) that pick up the spores and move them long distances.  Again, this is another amazing dispersal mechanism.

Slime Molds:  Slime molds are not true fungi, but members of a unique group of organisms called the myxomycetes.  These organisms spend part of the lives in an amoeba-like stage (so in a sense are animal like), but when they reproduce, form spores the way true fungi do.

The most common slime mold I encounter is one I affectionately call dog vomit slime mold, but is more commonly called scrambled egg slime mold.  This slime mold really looks like someone’s dog upchucked in your flowerbed.  Watch for this slime mold (usually in the genus Fuligo) after you’ve spread a new layer of mulch on your flowerbeds.

Another slime mold you may encounter is Physarum which is often found on turfgrass.  I remember seeing this slime mold in a lawn walking home from work one day.  I thought that someone had been out on their lawn spray painting some furniture and left gray paint residue on their grass.  On closer inspection however, the gray turned out to be thousands of small, spherical fruiting bodies (i.e., reproductive structures) of the slime mold.  I have also seen this slime mold crawl over and fruit on other plants such as ginseng and tomato.

Perhaps the most dramatic slime mold I see is the chocolate tube slime mold (Stemonitis), which often fruits on the walls of houses.  It can form HUGE masses of what appear to be clusters of miniature cattails.  One of my friends saw this slime mold and claimed it was straight out of Stranger Things (the horror television series I’ve been binge-watching of late).  There’s no accounting for taste!  Sigh.  Slime molds will ever remain cool in my book.