October hosts my favorite holiday of the year, Halloween.  Call me sentimental, but how can you go wrong (having a moniker like “Dr. Death”) with celebrating a holiday that caters to things that creep and crawl in the night.  Most people think what I enjoy and do professionally is pretty weird and I have to say there’s a part of me that revels in sharing with the public the bizarre (well, I’d say “cool”) things that I get to see every day.  Halloween fits in perfectly with what I readily admit is my somewhat warped and twisted world viewpoint.  What can I say?  I love my job.  And luckily, my clients have embraced (or at least tolerate) my rather eccentric world viewpoint.

In the spirit of the Halloween season, here are my votes for the top three most disgusting and horrifying diseases. 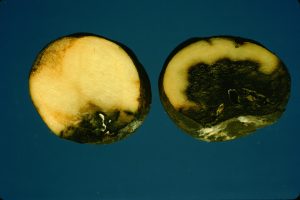 Bacterial Soft Rot:  If you like slimy, oozy, stinky plant diseases, this is the one for you.  Bacterial soft rot is caused by several bacteria in the genera Pectobacterium, Dickeya, and Clostridium (amongst others).  The characteristic of these diseases is the collapse and liquefication of plant parts.  I most commonly see this disease (but not exclusively) in vegetables like potatoes, carrots, cucurbits (e.g., pumpkins and squash) and cole crops (e.g., broccoli and cabbage).  If you’ve ever had potatoes liquefy in your refrigerator (or worse yet, your cupboard), you’ve experienced the joys of bacterial soft rot.  Soft rot bacteria liquefy plants parts by producing enzymes called pectinases.  These enzyme digest plant pectin, the “glue” that holds plant cells in place and helps give plants their shape.  Once the pectin is gone, the plant structure collapses into a soupy mess.  EWWWWW!!!  Oftentimes this slimified plant tissue has a rather fetid stench.  In particular in my mind, soft-rotted broccoli has the ultimate, vomit-inducing bouquet.  The worst part about working with bacterial soft-rotted materials is that after a while you get used to the smell.  But it seeps into your clothing and when you get on the bus to go home, people move away from you because they think you have a personal hygiene problem. 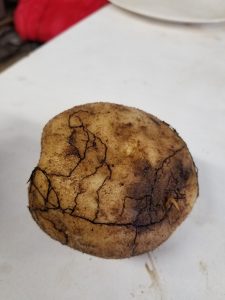 Armillaria Root Disease:  I most commonly see this disease associated with woody trees and shrubs.  The fungi involved (several species in the genus Armillaria) typically infect through roots (often wounded roots) and colonize up into the trunks under the bark where they form a thin, creamy white fungal masses called a mycelial fans.  Eventually Armillaria produces mushrooms (called honey mushrooms) which help with its reproduction.  The reason I find this disease very creepy is that it produces root-like (or shoestring-like) structures called rhizomorphs.  These grow outward from an infected plant, “looking for” other plants to infect.  I’m anthropomorphizing a bit here, but the fact that Armillaria can grow from tree to tree, is quite disturbing to me.  And even if the trees are removed, the fungus is still in the soil.  Amanda Gevens, the UW-Madison/Extension vegetable pathologist, recently told of her experience with Armillaria when she grew potatoes recently cleared forest land.  As she harvested her potato tuber, she found that they were covered with rhizomorphs.  CREEPY!!!  Armillaria can infect and kill trees (and other plants) over large areas.  There’s actually a super-colony of Armillaria in the Upper Peninsula of Michigan covering 37 acres.  The nearby town of Crystal Falls celebrates “Humongous Fungus Fest” every August in honor of this organism.

Common Corn Smut:  As I’ve said before, I LOVE plant diseases, but I have to say this fungal disease of corn really grosses me out.  I think this is because I encountered this disease as a kid when I helped my maternal grandparents on their farm every summer in central Illinois.  I would often run across corn ears with the swollen, tumorous masses (galls) characteristic of common smut.  I don’t know which stage was worse, the early stage where the galls were pasty, zombie gray, or the later stage where the masses converted to powdery mass of spores that crumbled and blew away.  In my adult years, I have come to have a greater appreciation of this disease as the early, fleshy, zombie phase is sold in high end restaurants as a culinary delicacy under its Native American name “huitlacoche”.  But even so, the horrible childhood memories of this disease linger.  SHIVER!!!  And another cautionary tale in the context of smut. . .Be sure when doing internet searches on smut diseases to include the pathogen name (in the case of common corn smut, Ustilago maydis) in your search.  If you search on just “smut”, you will end up at a number of very, um, interesting websites that have NOTHING to do with plant diseases.

So there is my Halloween plant disease hall of fame.  Enjoy.  And once you think you’re grossed out by these beauties, try doing an internet search on “cordyceps, insects and photos”.  You won’t be able to sleep for days.  But that’s an article for PJ Liesch, my colleague in the UW-Madison Insect Diagnostic Lab.  MWAH-HAH-HAH!!!!!

To learn more about common diseases and disease management, explore the Plant Disease Diagnostics Clinic (PDDC) website (https://pddc.wisc.edu/) and in particular, check out the fact sheet section of the website.  Also follow the PDDC on Facebook and Twitter @UWPDDC to receive updates on emerging diseases and their management.