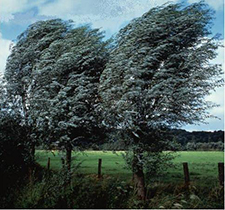 June 1 marks the beginning of Hurricane season in the Atlantic and while full-blown hurricanes do not reach Wisconsin, their effects (and those of other seasonal winds) can have an influence on plant diseases.

Soybean rust:  A somewhat recent example of an apparent direct effect of a hurricane was the introduction of the Asian soybean rust fungus (Phakopsora pachyrhizi) into the United States in 2004.  Prior to 2004, this fungus had been well-established in South America (after an initial introduction in 2001) and caused substantial losses in soybean production in Brazil.  US soybean producers had been watching this disease closely and were concerned that the pathogen would hopscotch from island to island through the Caribbean and eventually make its way to the US.  The introduction of soybean rust however occurred quite abruptly in 2004.  The speculated method of introduction was by Hurricane Ivan which skirted the coast South American in September and then made its initial landfall in the US in Alabama (as a hurricane) and then made a second, later landfall in Louisiana (as a tropical depression) after reforming following a looped track through Maryland, and then eventually the Florida peninsula.  Soybean rust was first confirmed in Louisiana in November of 2004, roughly two months after Hurricane Ivan.  Losses due to soybean rust in the US have never approached those seen in Brazil, but the disease continues its presence in the southern US to this day.  While soybean rust has never been reported in Wisconsin, spores of the pathogen have been documented in Wisconsin, apparently having been blown into the state by southerly winds.  Fortunately these spores have never led to a soybean rust outbreak.

Black stem rust of wheat:  If you find the idea that spores of the soybean rust fungus can make it all the way from the southern US to Wisconsin amazing, I present for your consideration another amazing example of long distance movement of a pathogen via wind:  black stem rust of wheat.  The fungus that causes this disease (Puccinia graminis) is an alternating rust that requires two very radically different plants, wheat (a grass) and barberry (a broad-leafed shrub), to complete its life cycle (including sexual reproduction).  During this life cycle, spores produces on wheat infect barberry and spores produced on barberry infect wheat.  Attempts (and very successful ones) were made to eradicate barberry from wheat-producing regions of the US starting in 1918.  The thought behind barberry eradication was that eliminating this plant would prevent the black stem rust from completing its life cycle, and thus eliminate the disease.  What folks didn’t count on was a third type of spore that the fungus produces, one that is produced on wheat and reinfects wheat.  This spore type (called a urediniospore) is produced year around in the southern US on wheat, and urediniospores can blow from the south into more northern wheat-producing areas (including Wisconsin) every growing season.  This movement is so well documented that it’s been dubbed the Puccinia Pathway.  Although eliminating barberry did not totally eliminate black stem rust, it did severely limit sexual reproduction of Puccinia graminis.  This is important, because it’s during sexual reproduction that recombination of fungal genes occurs that can lead to new variants of the pathogen that can overcome resistance genes in commercially-grown varieties of wheat.  Genetic resistance is a major means of controlling black stem rust.  Less pathogen sexual reproduction means that resistant wheat varieties tend to be effective longer. 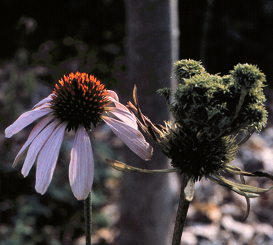 Aster yellows:  My final example of a windborne pathogen is an indirect one.  Aster yellows is a disease caused by a bacterium-like organism called a phytoplasma (specifically the aster yellows phytoplasma).  This organism does not survive on its own in the environment, but will survive inside infected living plants.  The host range of the aster yellow phytoplasma is very broad including over 300 plants in roughly 40 plant families.  In addition to residing in infected plants, the aster yellows phytoplasma also can survive in association with certain insects, particularly the aster leafhopper.  This insect does not survive Wisconsin winters, but does overwinter in the southern US.  During the growing season, aster leafhoppers can fly (and/or be blown) to Wisconsin, and some carry with them the phytoplasma.  As the leafhoppers feed in a plant’s phloem (it’s food-conducting tissue), they drop off the phytoplasma, and once in the plant, the phytoplasma induces a wide range of very bizarre symptoms.  These include, but are not limited to, yellow leaves, curled and cupped leaves, leafy-green flowers, tufts of white hairy roots (particularly on carrots), mini-tubers on the branches of infected potato plants and an off flavor to certain edible plants (like carrot).  The year 2012 was a particularly good year for aster yellows.  The season got started early (March), aster leafhoppers arrived early and in larger numbers than usual, and a higher percentage of the leafhoppers carried phytoplasmas than normal.  There were symptoms of aster yellows EVERYWHERE.  I was in plant pathologist’s heaven.  I also distinctly remember talking about this disease in a presentation in Iron County, WI.  The county Extension educator who was hosting me came up after my talk and told me how her little boy, who had always liked carrots, refused to eat them that year because they “tasted funny”.  She said after seeing the photos in my talk, she realized all of her carrots had aster yellows.  Her son had been able to tell.  Amazing!