In my June web article, I mentioned cedar-apple rust and other Gymnosporangium rusts as diseases that I expected to see a lot of this year.  This has certainly been the case over the last month.  What has surprised me (and I probably shouldn’t be surprised given our continuing wet weather) is the plethora of other rust diseases that I have seen in the clinic this season.  Here’s a rundown some of the more interesting examples of rust diseases that I’ve seen this year. 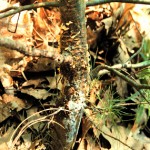 White pine blister rust. This is an alternating rust where the pathogen requires two different plants to complete its life cycle.  In this case the hosts are white pine and Ribes species (in particular gooseberries and currants).  The white pine phase of this disease reared its head in May in the Madison area (see my PDDC Facebook page post from May 20) and the Ribes phase of the disease should be in full force right now.  Watch for orange, powdery masses of spores of the undersides of gooseberry and currant leaves.  Management of this disease relies on not growing white pines and gooseberries/currants in close proximity. 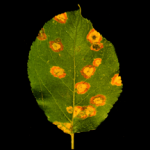 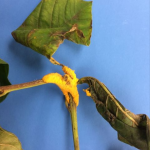 Crown rust. This alternating rust has been particularly dramatic on buckthorn this year (see photos posted on the PDDC Facebook page post on June 22).  There are several variants of the crown rust fungus and each variant has a specific grass alternate host.  The most common alternate hosts that I encounter are oats (in agricultural settings) and turfgrass (in urban settings).  If you need another reason to eradicate buckthorn (in addition to the fact that this plant is incredibly invasive), control of crown rust is that reason. 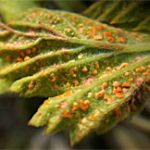 Orange rust. This rust requires just a single host (raspberry) to complete its life cycle, and leads to stunting of raspberry plants, yellowing of raspberry leaves, and eventual formation of masses of orange powdery spores on the undersides of leaves (see the PDDC Facebook page post on this disease from June 3 for photos).  Unfortunately the orange rust fungus becomes systemic in plants (surviving as fungal hyphae/threads) and management requires plant removal and destruction.

Mayapple rust. This is another single host rust, with the fungus completing its life cycle on mayapple.  Watch for angular (i.e., vein-bordered) yellow leaf spots with spores of the fungus produced directly beneath these spots on the undersides of the leaves.  The resting spores produced by this fungus are two-celled and spiny (see the PDDC Facebook page post from June 30 for photos).  This rust can be managed by a combination of removal of infected plants (as they go dormant for the season) and timely fungicide applications the following growing season as new plants emerge.

Bean rust. This is another single host (snap/pole beans) rust that I have seen in the past, but I have only ever seen the later stages of the disease where the fungus produces orange and brown-colored spores (called urediniospores and teliospores respectively).  This year I got to see (for the first time ever) a third type of spore produced by the fungus (called aeciospores).  These spores are white and are produced in rings of fruiting bodies (i.e., reproductive structures) on the underside of bean leaves (see the PDDC Facebook page post from June 30 for photos).  This disease is relatively uncommon in home gardens, most likely because many snap bean varieties have at least some resistance to the disease.